My first reaction to Vandana's proposal, via email,  about an alliance between documentary filmmakers and cab drivers  was befuddlement -- wha...taxis? journalists? But the more I studied it, the more intriguing it became. As it is, I am a bilingual, bi-national (Ecuadorian, American) journalist based out of Quito, and depend on taxis a lot, especially in the last year when, due to a case of tendinitis in my left heel, I am on doctor's orders not to walk too much.
But it has been my nature for years to converse with Quito's local "taxistas" anyhow, as well as argue with them when they claim their meters don't work and they want to charge me triple. A great many drivers are old men who used previously drove trucks or buses, and continue to drive because their pensions are inadequate and/or their grandchildren need financial support. Their are also more than a few drivers you'll meet who have trade skills and certifications, and occasionally even a university degree, but have been downsized and driving a cab guarantees some, as opposed to no, income.

Some speak English due to having previously lived, illegally, in the United States, earning enough money in a few years, sometimes as a taxi driver, to make a down payment on a house in Ecuador or pay for their children's college education. I once got into a cab being driven an Army officer in full uniform -- and in flagrant violation of the military's strict prohibition against servicemen and women "moonlighting" (or since this was at midday, "sunlighting").

The tallest tale told to me with a straight face was by a young man who said he picked up a young woman late at night who asked that he take her to the city cemetery, Upon arrival, and after giving the driver her phone number, she ran out of the car in tears without paying her fare, and climbed the locked gate, leaving behind a sweater. The next morning, the driver, so he said, called the number and an older woman responded, saying that the youn woman he was asking about was her late daughter, who had died the previous year in an auto accident.
It was an entertaining, but thoroughly apocryphal anecdote, a variation of the classic Latin American legend of the "llorona" (the "crying woman"), whose roots probably precede the Spanish colonial conquest.

Drivers in Quito are about 99% male, and almost are surviving victims of assault, something which is no longer confined to nocturnal hours and poor neighborhoods. However, there has also been a new phenomenon of vehicular muggers, groups of thugs who purchase older cabs or paint cars yellow to resemble taxis -- and even install running meters -- in order to assault, mug, kidnap and even rape unsuspecting passengers. Cabs have also become a political issue, particularly after a fiat several years in which President Rafael Correa claimed everybody had a "right" to work and ordered municipalities not to prosecute unlicensed drivers and vehicles, even though licensed drivers are required to pay municipal taxes. This policy was rescinded once news reports surfaced of the emergence of "criminal" cabs. However, this bespeaks of the challenges faced by a country in which, despite a notable growth in hte real estate sector, in which too many of its citizens are unemployed or underemployed --even while being overworked; a great many drivers work 12 to 14 hour days. Yet the compensation is relatively inadequate, since fares have remained low -- about a dollar per two kilimeters -- even as the cost of living has risen. And despite the existence of a union for drivers, a fear of losing potential customers keeps its members from collectively agreeing to raise prices. 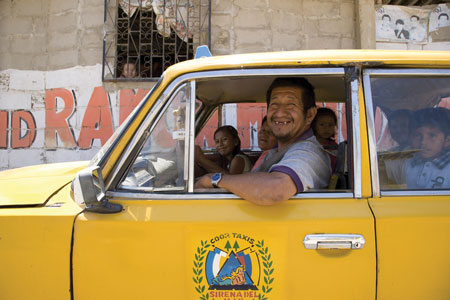 And thus, the taxi remains not just a means of transport for Quito's passengers as they move about the city taking care of whatever personal business needs to be taken care of, but also conveyance for the demands and drama of human existence.


Rick Segreda is the film critic for Ecuador's 'La Hora' and a professor of film at the Instituto de Artes Visuales de Quito, as well as a filmmaker and author.