In September 2013 this project reached a milestone. We successfully completed a film festival comprised of taxi videos from all around the globe. Submissions came in from Cairo (Egypt), Kabul (Afghanistan), Tehran (Iran) and Pune and Mumbai (India). Our partners STEP Trust arranged screenings in Kashmir, New Delhi, Chandigarh and Manipur starting on 21st September 2013 in Pulwama, Kashmir and ending on October 2nd 2013 in Churachandpur, Manipur. The films were well received and the audiences loved the overall concept. This is a picture of our audience in Chandigarh, which consisited of youth from Bhutan, India, Nepal, Afghanistan and several other neighboring countries. And another picture of the students in Churachandpur College watching the films. 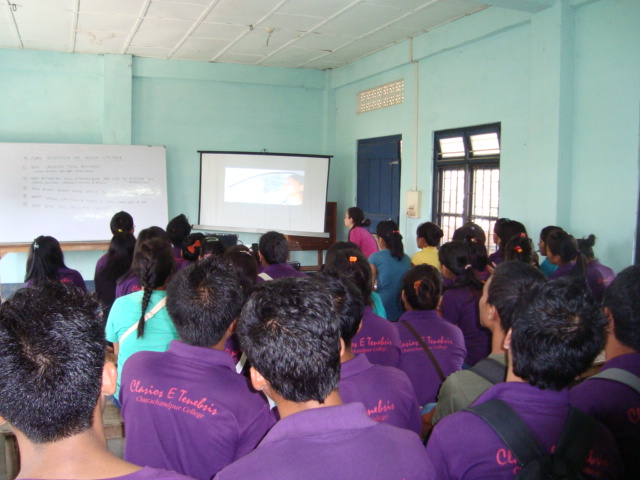 My own journey of making films based on taxi drivers started in New York City, with short films about South Asian drivers dealing with the repercussions of 9/11. This developed into a larger project called The Taxi Takes on Terror where I captured candid conversations between passengers and drivers in Mumbai after the 2008 terrorist attacks there. I rode in the front seat with various taxi drivers as they picked up passengers, and then filmed the talks and interactions between them. Since then, I've heard from many people who reacted to my project by relating that they too have had honest talks inside taxis all over the globe.

The democratization of media-making - with camera-enabled smartphones, mobile technology, self-publishing platforms, social media - and the rising wave of citizen journalism, all brewed together to inspire the next stage of this project - THE TAXI TAKES ON THE WORLD. This universal phenomenon of interactions inside taxis, coupled with the current digital lifestyles we live, led me to start crowdsourcing taxi videos starting in 2011. I invited people all around the world to send me their taxi videos capturing local perspectives about the big global issues of our time. These videos give us a glimpse of the grassroots dialogues and the day-to-day incidents that reflect alternative voices to those we usually consume via mainstream media. And screening these views in places of conflict like Kashmir and Manipur proved to be an incredible peace building initiative.

The taxi video that won the Audience Choice Award at the film festival in India was about a female taxi driver in Pune, India. The video by Arshak MA (a graduate of the Film and Television Institute of India) focuses on how one woman in Pune decided to start driving a taxi to assist in the safety of women and hopefully prevent future rapes. When this film was screened in New Delhi, the audience unanimously applauded her efforts. We will be gradually uploading the other videos we received as well and we know that the filmmakers will be eager to receive your feedback.

Thanks to everyone who supported me in making this film festival happen! Please continue to Take on the world!